Scotland’s public bodies could save themselves millions of pounds a year by moving bulky and seldom-used files to cheaper out-of-town facilities or by increasing their use of digital storage.

The Scottish Futures Trust (SFT), which has a team dedicated to helping the public sector improve the management of its buildings, has carried out research and believes there are 1,000,000 metres (or roughly 800 miles) of shelving taking up expensive office space in hundreds of public sector buildings across Scotland. 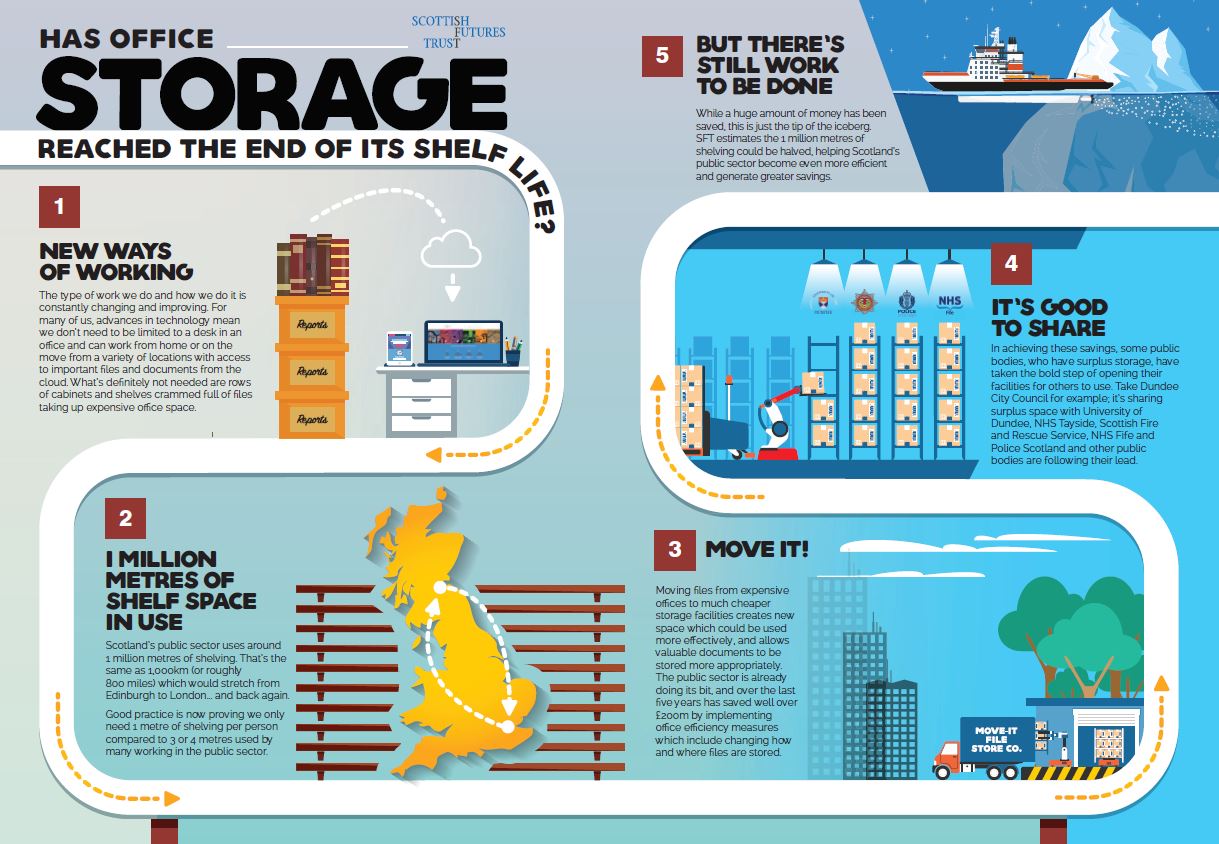 Of that, more than 50% could be relocated to much cheaper locations, thereby freeing-up expensive office space for better use.

Iain Wardrop, associate director at SFT and who leads on SFT’s storage initiatives, explained: "The public sector is already doing a great job, as over the last five years cumulatively they’ve saved well over £200m by implementing office efficiency measures which have included changing how and where files are stored.

"We are encouraging all public bodies to take a serious look at what day-to-day files they need and move rarely used documents to out-of-town locations or to store them digitally.

"The scale of what can be achieved is huge. For example, Glasgow City Council has saved many millions of pounds by modernising its office portfolio, an integral component of which was moving its record management systems to much cheaper out-of-centre facilities and by a move to a paper-light working environment using an electronic records system. And the City of Edinburgh and Fife Councils have embarked upon similar office and storage rationalisation programmes and are also set to save significant amounts of money.

"We applaud Dundee City Council which has taken the bold step of sharing its surplus storage space with other public bodies including the University of Dundee, NHS Tayside, Scottish Fire and Rescue Service, NHS Fife, and Police Scotland.

"With public sector bodies under increasing pressure to make the most of ever-shrinking budgets, we are working with them to ensure resources are used more efficiently, money is saved and the buildings they operate from have a greater impact on the ground."

Brian Mudie, estates manager, University of Dundee, said: "The University of Dundee uses the off-site records store provided by Dundee City Council. The benefits to the University include easing the requirement for a greater amount of potentially expensive on-campus storage and the availability of reasonably priced secure local storage within travelling distance on a daily basis.

"The costs are significantly less expensive than commercial storage companies."